Over the past few months Clash of Clan players have been treated to balancing changes, quality of life updates, numerous reward challenges, and the announcement of the first official Clash World Championships. But the dev team hasn’t been basking the glow of the game’s introduction into the world of eSports. A massive update is scheduled for April. Here is what we know so far, what else might be included, and when we might see the update:

A main goal for the Clash team is to have as many players as possible playing close to the end game, or top level. At this point in the game’s evolution that means Town Halls 10 through 12 – the siege machines, electro dragons, and the majority of the top tiers in CWL. However, it takes a long time to upgrade to Town Hall 10, especially getting the heroes at Town Hall 9 up to level 30 each.

The April update changes how fast newer players can speed through the lower levels with major reductions in the time it takes to upgrade buildings and how much armies cost, allowing you to save more resources and raid enemy villages faster. Almost everything is getting a reduction, but here are the specifics:

Here are the defensive buildings that will not only cost less to upgrade, but will soon upgrade quicker:

Another major time constraint in the game is how long it takes to upgrade troops in the Laboratory, especially given that you have to do them one at a time. 16 troops and 5 spells will not take less time to upgrade. Getting you to a max army quicker and ready to test out new attack strategies. Here is a list of the troops and spells seeing reductions:

Get ready to max your Town Hall level and push on to the next. Or if you are nearing a max Town Hall 12, April might be the time to start up a second account.

CWL has been a great success thus far, adding an exciting new game mode and improving clan wars. However, with only 15 spots per team, it is very limiting on participation and leaves many clan members sitting idle for a week. In the April update the game will introduce a new 30 vs. 30 CWL option. Your clan will have to be at least in the Bronze III tier (or higher) in order to select the 30v30 option. At the start of the sign-up process you’ll have to pick one war size and stick to that for the entire CWL.

Additionally, CWL medals, which are used to buy exciting new rewards such as the new Hammers, will be based not only on where your clan finishes in your CWL clan ranking, but also your individual stars. Players will get 100% of their CWL medals as long as they earn at least 8 starts during the CWL cycle.

What else could be included in the Clash of Clans April 2019 Update?

While a new troop or spell is still very possible for the home village, the most likely addition to the next update is Builder Hall 9. It’s been over a year now since Builder Hall 8 was released (March 5th, 2018), and a lot of clashers have fully maxed out their Builder Base – even with those expensive walls. Builder Hall 9, along with a new troop and a new top-level defense, are almost certainly set to arrive in April.

When will the update arrive?

The next round of Clan War Leagues kicking off at the start of April, running for just more than a week. The April update arrive in mid-month giving players a chance to adjust to the changes prior to the next CWL.

The Clash of Clans April 2019 update has finally arrived and with it comes major changes to the CWL, game challenges, troop levels and defenses. Let’s dive into each key part of the update. 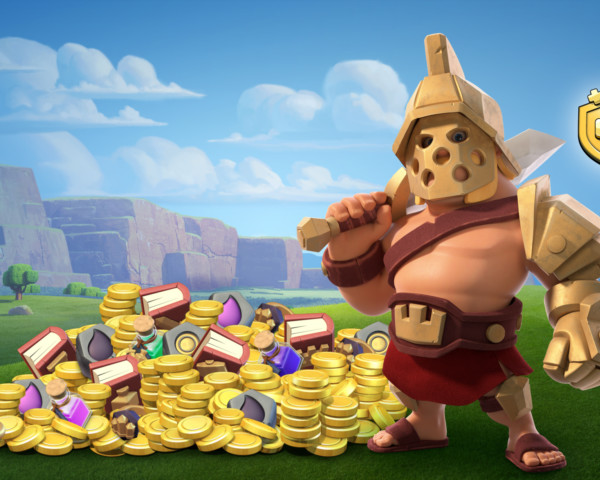 Love Clan Games? Then you are in for a treat. Introducing a month long, single-player quest of challenges. Players will be presented with daily challenges and monthly challenges that continue to appear as the month progresses. Each new season starts on the 1st of each month and ends on the last day.

As players complete challenges they collect points which are then used for unlocking rewards that are listed on the quest road map. Plus, at the end of each month, players can collect massive amounts of resources from the new Season Bank, which collects automatically as players attacking normally throughout the month.

Clashers can spend $4.99 each month to unlock a Gold Tier in the new challenge game mode, giving them access to additional rewards, higher bonuses, and an exclusive monthly Hero skin, changing the look for their Heroes.

Prepare for the coming point defense vs. mass army battles, with new defense and troop levels being introduced to Town Hall 12.

One of the biggest surprises was the omission of Builder Hall 9. Level 8 has been active in the game for over a year now, leaving a lot of based maxed out. Expect that to be the next game update later this spring.

Until next time, Clash on!