Overview of the Big March 2018 Clash of Clans Update

The March 2018 Clash of Clans update went live in-game today and features three main areas of improvement and new features – Builder Hall 8, Update to Clan Games, and Home Village changes. In this article we will walk you through an overview of all the new changes for Builder Hall 8 (there’s a lot). In the days and weeks to come we will have articles on the other aspects of the big March update as well as taking a deeper dive into their impact on the game, where you should focus your resources first and updated strategies.

Long-awaited, Builder Hall 8 was the most likely addition to the March update, since players knew of its existence all the way back at the original reveal of the Builder Hall. The new level finally brings into game everything that was hinted at by the developers and seen on in-game screens as future content. Expect this to be the last Builder Hall update until the fall at least, with the exception of minor adjustments to troops and defenses.

There are a ton of changes with an entirely new Builder Hall levels, so let’s to get them:

There is a lot to consider with an entire new Builder Hall level, but your main objective at the start should be to upgrade to level 8 as quickly as possible. There is no base weight to be concerned with since matches as based on trophy levels. Then get all of the defenses and traps built before worrying about upgrading any of them. It’s more important to add the extra buildings so your opponent has a hard time earning percentage points and reaching your Builder Hall for the star.

Enjoy the new upgrade and check back in soon as we continue breaking down the March update, where to focus your resources and updated strategies.

The Clash of Clans March Update is finally here! In part two of our review series we look at all the changes coming to Clan Games including three big new rewards.

In Part 1 of the Update overview, we covered everything new for the Builder Hall. Today we look at the changes made in the March update to the Main Village in Clash of Clans. New levels, balancing, new TH11 content and the mysterious new Trader! 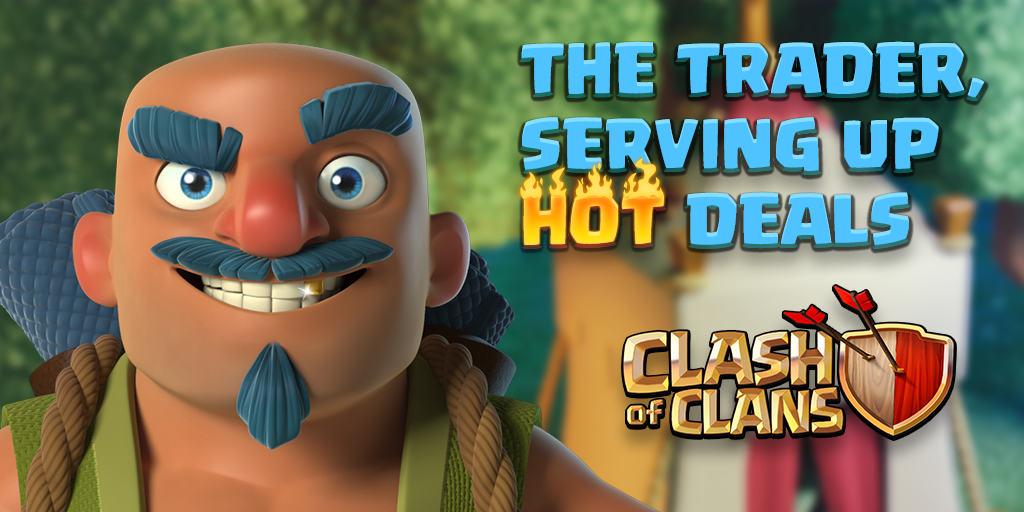 First, let’s start with that new tent set up on the left side of your base and the latest way to acquire unique upgrades. Meet the Trader! Starting at Town Hall 8 he will visit your village and offer deals to exotic rewards for gems. Three offers will be made at a time and will reset every day. The deals with change and be unique for your town hall level.

Much like in Clash Royale, it’s another way to buy with gems specific upgrades if you are willing to hand over the gems. Now on to the balancing changes:

Where to focus first?

So you have a new troop research, new traps, walls and the multi-mortar to work on, where should you start? Most likely you weren’t using max P.E.K.K.A. currently, and the need for more level 12 walls is low. Instead get your Master Builder to upgrade the multi-mortar, and move it farther into the base. The additional slash damage will help defend against mass bowler, giant and/or witch attacks. Place it at least three buildings deep from the outside of your base to prevent Bowlers from being able to attack it on their first wave of boulders. As for your Main Village builders, if you are Town Hall 11, get them all busy upgrading those new trap levels. It won’t increase your war weight and even though they are small, they can have a big impact on your defense. I’d recommend Skeletons first (see above), Giant Bombs (cluster them to fight against Hogs and Bowlers), then Air Mines and Regular Bombs last.

Check back in later this week for the third and final part of the Clash of Clans Spring 2018 update overview. We will look at all the changes coming to the Clan Games! Until then good luck Clashers!

The Spring 2018 Clash of Clans update finally arrived this week and it has brought numerous changes across the game. We’ve covered the Main Village and Builder Base so far, and today we conclude the overview series with a look at what’s new for the Clan Games.

Surely by now you are busy raiding away to store up the needed gold and elixir across your two bases for all the new levels and troops added to the game as part of the Spring 2018 update. If you haven’t read parts one and two yet, head there first and we will be waiting here. Clash of Clans Update Part 1 – Builder Hall 8 Arrives and Clash of Clans Update Part 2 – Balancing Changes and New Levels for the Main Village.

In today’s post we are covering how the development team is changing the Clan Games. The last round of games kicks off in just a few days so read ahead and get ready for some interesting new rewards. There are four main changes to the games:

The most exciting change coming to the games, and maybe within the entire Spring 2018 Update, has to do with the three new magic items. All three bring something new to the game and the Runes especially will be extremely helpful at every Town Hall level.

There are 5 of these, one for each resource type – Gold, Elixir, Dark Elixir, Builder Base Gold and Builder Base Elixir. Using one of these magical runes will completely fill up your storage for that resource type. Yes, 100% filled! Imagine a Dark Elixir rune for players trying to max out their heroes – 200,000 dark elixir. That one is going to be rare surely, but still the chance to land it will be exciting.

Just like the Clock Tower in your Builder Base, using this potion will speed up the progress of your builders at your Home Village by 10 times for 1 hour. I imagine this will be a reward we see often and usually at the lower levels of the Clan Games.

This reward allows a player to upgrade one wall piece, one level, without spending the resources. Players can hold 25 of these at a time. Not a tremendous reward, but still helpful as walls eventually cost 4 million gold or elixir for level 12. This reward may be offered as an individual ring at the lower levels or in a group of 5 at the higher levels.

For each level your clan completes during each games event, XP will be added to your clan’s total. This is mostly helpful for newer clans and those still unlocking the benefits that come with Clan levels 1 through 10.

Starting this weekend there will be 9 new Clan Games challenges. Here is the list via the Clash of Clans Blog:

Some of these look quite challenging, such as hitting above your Town Hall level, going up against Titan League bases, and raiding without Spells or Heroes. Expect these to come with a number points reward.

A small addition, but there will be a new player achievement to complete tied to activity in the games. As you accumulate points in Clan Games you will receive XP and gem bonus. There are three levels as always for the achievement at 10,000, 50,000 and 100,000 Clan Games points. At those levels players will receive 20, 200 and 2,000 XP, as well as 50, 100 and 250 gems. Not bad for a system that is already giving you rewards to start with.

So, there you have it, all the changes coming to the Clan Games starting this weekend. Check back soon for updated strategy content, analysis for how all the changes are impacting the game, and what’s ahead next.